What do you know about traditional souvenirs from Russia? Most probably you’ve heard of Russian nesting doll ( ‘mastryoshka’ in Russian), but not many visitors can remember other traditional crafts. In Moscow, you can also buy Gzhel, Valenki, Khokhloma, Orenburg shawls, Zhostovo trays, Amber, Matryoshka doll and many more items. And below you will see the most popular and unique souvenirs. Gzhel is a style of Russian ceramics which originates from the village of Gzhel not far from Moscow. The pottery feature distinctive blue designs on white background. The range of Gzhel production is very diverse, among most popular items are tea and coffee services, clocks, lamps and so on.

Valenki or Russian felt boots used to be very popular footwear in winter. They’re not so widespread today in big cities but are still common in the countryside. Valenki are among the warmest footwear that can be used in severe winters.

Orenburg shawls may become a great souvenir for women, who appreciate handmade things. This type shawl originated in the Orenburg area about 250 years ago. The shawls are made of a special blend of silk and thin goat fiber.

Zhostovo trays are beautiful metal trays painted with mixed garden and wild flowers come from a small village Zhostovo. Nowadays Zhostovo trays still produced in Mytishchi Area. It is a great present that keeps the warmth of craftsmen hands a peace of mysterious Russian soul.

Khokhloma is a traditional Russian craft originated in the 17th century in the area of Nizhniy Novgorod. It’s the style of painting on wooden tableware and furniture. Khokhloma style can be recognized for its red and gold flower pattern on a dark background. 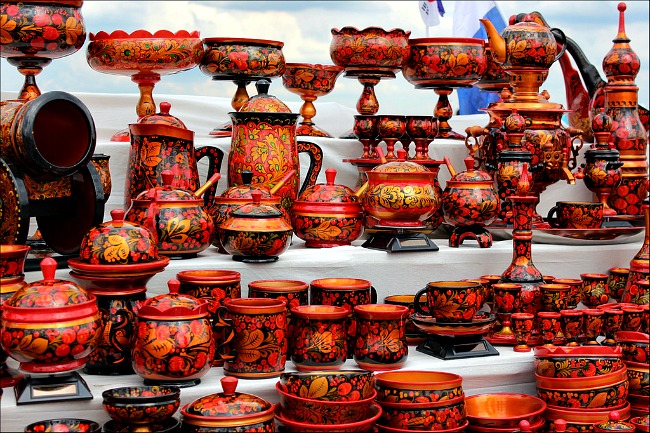 Matryoshka is the best known and most popular Russian souvenir. It is a set of painted wooden dolls of decreasing sizes one hidden inside another. The number of nested figures usually varies from three to ten, but in some rare cases can reach 50 and even more. Traditional matryoshka doll represents a woman dressed in a Russian peasant dress wearing a scarf on her head.

3 thoughts on “What do you know about Russian souvenirs?”